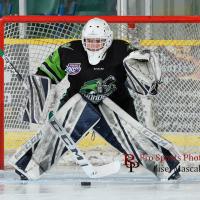 Congrats to CAC Alumni and Rookie Goaltender Eric Ward on being named top defensive player for the second time this season!

Goaltender Eric Ward of the Drayton Valley Thunder is the Alberta Ford Dealers AJHL Defensive Player of the Week with a 3-0 record in the opening days of 2020.  The rookie goalie posted three consecutive wins versus North Division opponents from December 28th - January 5th and extended his undefeated streak to five games.

Ward, 18, faced the Fort McMurray Oil Barons in back to back games after returning to play following the Holidays.  The Edmontonian stopped 28 of 30 shots in game one to win 5-2, then saved 38 of 40 shots to win 5-2 in game two of the weekend.  Ward held onto his perfect week with 42 saves in a 6-3 win versus the Bonnyville Pontiacs on January 3rd.

This is Ward’s second Alberta Ford Dealers AJHL Defensive Player of the Week award after first claiming the title during the week of November 11th - 17th, 2019.